"NOW" director Jim Rakete is live on ZDF Mittagsmagazin today, 22 January 2021, at 13:00! If you want to know more about him and his dedicated climate protection documentary, feel free to tune in. The programme will be broadcast today only on the ARD channel due to winter sports coverage. By the way, due to the Corona-related cinema closures, W-film has postponed the theatrical release of "NOW" to 11 March 2021. Fingers crossed that the cinemas will be able to reopen by then! 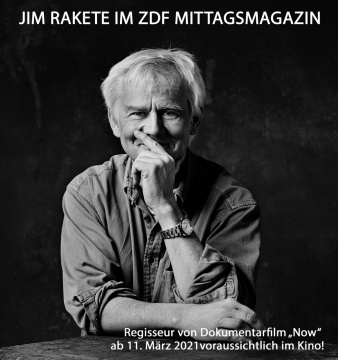 "NOW" by Jim Rakete: The film for the green turnaround

"If you fail, we will never forgive you!" Angrily, the generation of young climate rebels appeals to the common sense of adults and makes 2019 the year of their protest. The reason: the future of all of us is threatened by global warming. The Paris Climate Agreement of 2015? A hollow phrase, according to them. The Swedish schoolgirl Greta Thunberg is rising to become the leading figure of a worldwide movement that is shaking up the general public with civil disobedience, strikes and demos and is rapidly gaining influence. Governments are finally taking notice!

In his committed cinema debut "NOW", cult photographer Jim Rakete meets Generation Greta. Six young climate activists have their say, including Luisa Neubauer (Fridays for Future), Felix Finkbeiner (Plant for the Planet) and Nike Mahlhaus (Ende Gelände). Why did they become activists? What is at stake? The documentary, conceived by scriptwriter Claudia Rinke, encourages imitation. Quite deliberately – so that the youth of today also have a future tomorrow. Support is provided by punk legend Patti Smith, auteur filmmaker Wim Wenders and many more.