"An Uncertain Border" is now available on DVD and as VOD in the W-film Shop as well as in regular stores. The film was released on 25 May during the lockdown in the W-film online cinema with solidarity revenue sharing from the closed cinemas. Director Isabella Sandri tells the gripping story of a child abduction as a genre mix between psychological thriller and outsider ballad, whose motifs are reminiscent of Kubrick's "Lolita" and Fellini's "La Strada"! Highly topical, because child abuse in cyberspace and grooming are unfortunately still a sad reality! Great cast with Cannes award winner Cosmina Stratan ("Beyond the Hills"), young actress Anna Malfatti in her first cinema role and Moisé Curia. 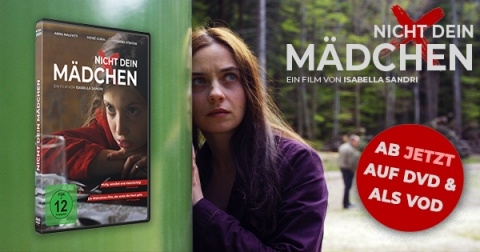 Richi (Moisé Curia) is on the road with a little girl (Anna Malfatti) in a camper van through southern Germany. They have a good time with each other, dress up, dance and laugh a lot. He is a seed salesman, she his little doll. An unusual couple, but happy? When the two stop off at a restaurant, the landlord (Heio von Stetten) becomes sceptical. Something is not right here! What's more, the girl speaks a very rare language: Ladin. Meanwhile in Rome, police inspector Milia Demetz (Cosmina Stratan) is investigating cyberspace and is hot on the heels of a paedophile network. When she discovers a girl in one of the anonymous videos, she is soon certain: the lasciviously photographed child is Magdalena Senoner, who disappeared in Tyrol at the age of five. But who is behind the camera? When the landlord forwards the footage from his surveillance camera to the police, all the threads come together. Can Milia save little Magdalena?