The documentary "Youth Outcry" by director Kathrin Pitterling is available as VOD and on DVD in the W-film Online Shop and in regular stores from 25 March 2022! The unique portrait about Fridays for Future provided a breath of fresh air in the climate discourse just in time for the Climate Conference 2021 (COP 26): On 28 October 2021, the award-winning ARD production was released exclusively in cinemas as a Director's Cut. In it, Kathrin Pitterling lets us get up close to the young activists, including familiar faces such as Luisa Neubauer and Clara Mayer. 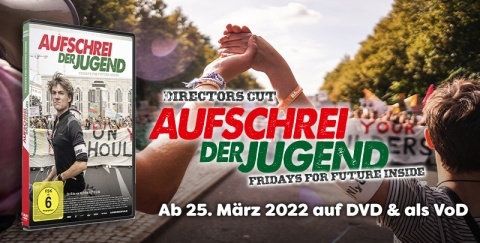 In 2020, Corona will shake up world affairs. The climate crisis? It's been pushed out of public discourse! The young activists of Fridays for Future see themselves deprived of their most effective forms of protest. But they are not backing down. They tirelessly search for new ways to get politicians to rethink. But there is a hail of hostility from the right and the internal psychological pressure is immense. Director Kathrin Pitterling succeeds in her documentary film "Aufschrei der Jugend" (Outcry of the Youth) with a spectacular look inside Fridays for Future. She wins the trust of her wonderful young protagonists and captures them in their most daring and vulnerable moments. The result is an inspiring narrative of the dreams, fears, successes and setbacks of a committed generation.